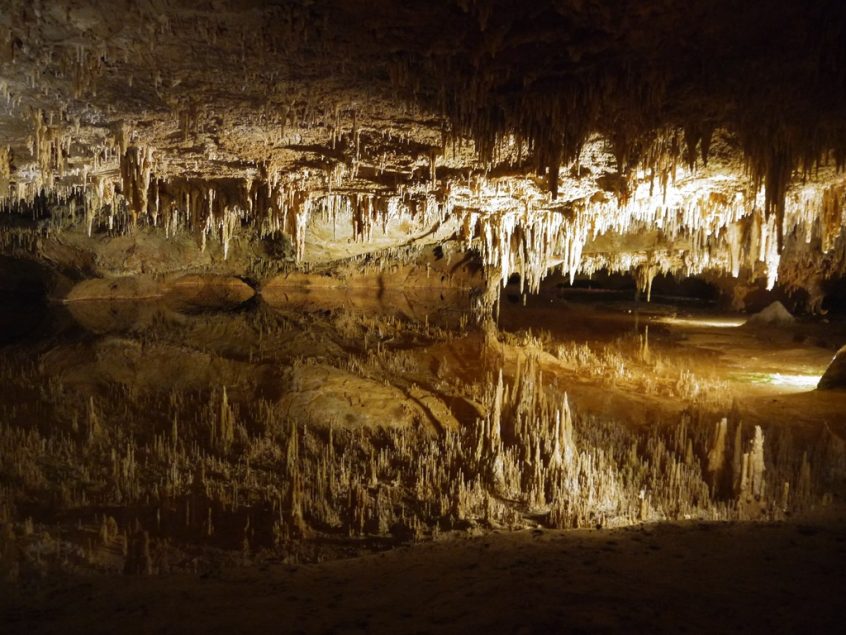 Luray Caverns is a beautiful and historical American cave in the Shenandoah Valley region of Virginia. People have flocked to marvel at the Luray Caverns’ clear pools and massive rooms since 1878. This cave even houses the gigantic natural musical instrument, the Stalacpipe Organ. According to the Virginia Travel Blog, “the constant 50-some degree temperature of each cavern is quite welcoming on a hot, humid day, and the old-fashioned soda fountain you’ll find in one cavern gift shop just adds to the summertime pleasure.”

The main features of the caverns are the enormous calcite formations that decorate the caverns. Countless stalactites (hanging formations) and stalagmites (formations jutting upward from the ground) have, over time, arranged themselves into stunning structures, often other-worldly in appearance. Comprised of calcium salts, these structures vary greatly in size and shape. Some of the most notable are the Double Column (a massive joining of stalactites and stalagmites) and Titania’s Veil, a display of calcite in its purest form. Giant’s Hall, where the Double Column resides, is home to multiple calcite creations, but no matter where in the caverns you go, you’ll find yourself made speechless by your surroundings.

The caverns also contain those clear pools of water we mentioned earlier, which mirror their surroundings, adding to the subterranean beauty—there’s definitely no need for rain gutter installation in these caverns. You’ll see the Dream Lake and the Wishing Well, the former creating an identical reflection of the stalactites hanging above it, the latter filled with coins and possessing an appearance that resembles both the ocean floor and outer space. Another special feature in the caverns is the Stalacpipe Organ. This is the largest musical instrument created, making use of over three acres of stalactites and cavernous echoes to create a magnificent organ sound. A console of four keyboards and wiring that spans over more than five miles come together to control this instrument; although the organ is sometimes played manually, it is usually set to automatically play seasonal songs.

Located in the Shenandoah Valley, the Luray Caverns are a must-see Virginia attraction for tourists and locals alike. In addition to Luray Caverns, you may want to make a visit to the Shenandoah Caverns, which is the only Virginia cavern with elevator service. The Shenandoah Caverns are among the most accessible caverns to explore during your vacation to the Shenandoah Valley. An hour long guided tour will take you deep into the ground where you will witness seventeen rock rooms like Grotto of the Gods. You will also see stunning formations like the calcite crystals of Diamond Cascade and be amazed that anything underground can sparkle so pristinely.

Another spot is Endless Caverns, where you can enjoy a 75-minute tour and learn about their unique geology and intriguing history. Found at the foot of the Massanutten Mountain range behind a pile of boulders, this is among the caverns near Harrisonburg that have been explored since the 19th century.

Regardless of which are Virginia’s beautiful caverns you choose to visit, they are all great vacation spots—especially for history lovers.